It’s not news that roofs and chimneys can become hazardous places. What is news are the strange things that actually happen around chimneys. In the past few years, the world has seen some bizarre chimney accidents, from falls to car damage. 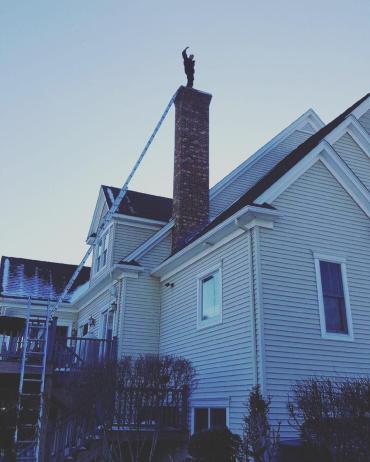 In early November of 2011, an enthusiastic astronomer named Yoan climbed the roof of the unused factory, Crevéchamps in Meurthe et Moselle, and onto the chimney to see an asteroid pass by Earth. Bearing the additional weight of both his backpack and computer, a few rungs of Yoan’s ladder collapsed, trapping him on the chimney.

In his struggle high in the sky, Yoan made the top of the chimney crumble, the noise of the falling bricks luckily awakening a nearby neighbor. Though firemen arrived to assist in good time, Yoan stayed perched on the chimney into the wee hours of the morning, not wanting to come down until 6:30AM that day!

In mid-December just last year, a young Minnesota native found his way up to the roof of the Hotel Intercontinental in Chicago to take scenic photos of the city at night. Nicholas Wiem, standing atop the 40+ story building, unfortunately lost his footing during the endeavor and fell into the hotel’s chimney. At first he simply suffered a few burns, seeming, for the most part, to be alright as Wiem texted and called his girlfriend during the ordeal. Given the fall, burns, and toxins that resided within the chimney, however, Weim passed away prior to being rescued from the shaft, an endeavor which took 4 hours, police and fire crews and a Michigan Avenue road closure to complete.

Perhaps the oddest chimney incident in recent history happened only a few weeks ago at the end of January and combined the forces of a chimney, strong wind and a parked car. As crazy as it may seem, chimney debris actually blew off of a house in Shelton, Stoke-on-Trent, England. Though no one was hurt and the whole chimney itself certainly did not break off and plummet onto the Fiat parked below, a great deal of bricks did, damaging 23-year old Julius Benjamin’s car enough to require his landlord to pay for the damage.

Accidents can happen no matter what you do. However, a good lesson we can take away from these examples is to exercise caution around both roofs and chimneys. Roofs in public spaces are certainly not playgrounds and are generally off-limits to visitors—so respect that. One could hardly give advice on rogue chimney bricks hitting cars, as it is relatively unheard of, however if a structure looks unsound it’s best to stay clear of it (both you and your car). And if you absolutely must access the exterior of a chimney, leave the work to the chimney sweep pros.