All About Your Chimney Lining

Why are so many people having their chimneys relined these days? As cold weather approaches and you fire up your heating system, wood stove or fireplace, are you thinking about the inside of your chimney system?  In a perfect world, the inside of a chimney is something you’d never have to think about. Unfortunately the world isn’t perfect and many masonry chimneys aren’t either! Let’s discuss what can go wrong inside of a chimney and how chimney liners figure into it. 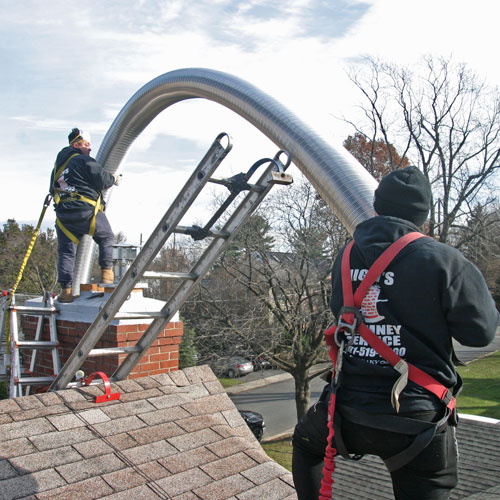 A chimney’s purpose is to carry the flue gases out of the home, and it needs to do this without getting over-heated. The problems with the inside of chimneys falls into two general categories: the problems that cause flue gasses to back into a house (smoke or carbon monoxide) and the problems that can cause house fires.

Most masonry chimneys are lined with fireclay tiles. This material has been used for 100 years and was a huge improvement to unlined chimneys of the 1800’s and before. In fact they served well enough until the 1970’s. Here’s what happened.

As people became conscious of the cost of heating, they started to put glass doors on the front of their fireplaces. This changed the fuel-air ration that had existed for eons. Suddenly masonry fireplaces that had never had problems before got full of soot and creosote in a matter of months.

Fireplace inserts caused the same problems, only even more so. The stoves were engineered for flue openings of six or eight inches round but were venting into chimneys built for open fireplaces. And fuel-air ratio was now so low that many chimneys collected a thick, wet, gooey tar. In some cases, chimneys were catching on fire within weeks after the stoves were installed!

Obviously the same was true for freestanding woodstoves.

And what about central heat flues, that is gas and oil? Well, those appliances changed too: they became much more efficient. The problem there isn’t creosote, as these fuels burn much cleaner. But it takes a certain amount of heat loss in the chimney to take the fumes up the flue and it wasn’t there anymore.