Some folks wonder what the difference between a chimney cover (also called a chimney cap) and a top sealing damper is. First, let’s make it clear in what ways they are the same. 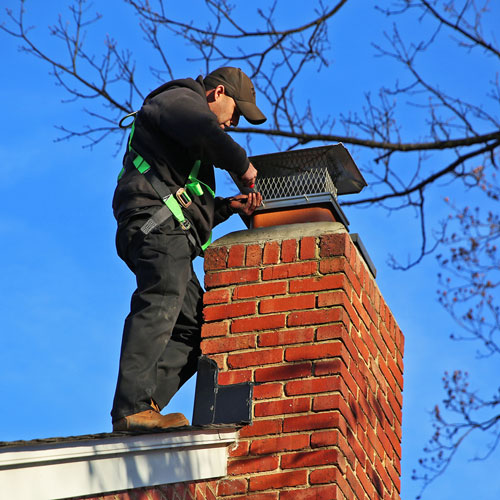 Both items mount on top of the chimney, keep most of the rain out and will keep larger pests from entering the flue, such as raccoons. There are important differences however.

Allow me to also explain that a damper and a flue are not the same either. The flue is simply the open middle of the chimney that the smoke goes up. Dampers are sometimes miss-called flues or flutes, but they are something entirely different than the flue.

A damper is intended to shut off- either fully or partially- the chimney flue. The reason you’d want to do that is to keep heat ($$$) from escaping up the chimney. This also reduces drafts (usually dramatically!) in the room where the fireplace is. They’re an economical alternative to repairing or replacing leaky old metal damper plates in the fireplace. The payback period is different for different people, but top-sealing dampers pay for themselves over time. They also keep rain out pretty well, though not as well as a chimney cap (explained later) and will keep larger animals out even when open.

On the other hand, the sides of a chimney cap always allow air to flow. They do not save money by keeping house heat in. A cap’s functions are to keep rain, debris (twigs etc.) and “critters” out, including and especially birds. The screen also serves as a spark arrestor i.e. it will keep most “hot stuff” that comes up in the smoke from landing on the roof. They do a better job of keeping rain out as well because the lids are larger. These are important functions and no chimney should be uncovered. This option is usually the least costly, especially if installed by a CSIA Certified Chimney Sweep Company.

There is the option to have both the damper and cover combined. For a couple reasons, too detailed to go into here, you can’t just put a chimney cover over a top-sealing damper. The biggest reason for this is because a damper lid won’t fit inside a standard cover. With that said, some manufacturers make a combination unit which gives you both the extra animal and weather protection. This combo also allow you to benefit from the heat savings of a chimney cap and damper all in one unit. This is usually the most costly option, but certainly the nicest.

For safety sake, you need a damper. For economics sake, you should invest in a top sealing damper. For the best of both worlds, spring for the damper-cap that provides a little bit of everything and avoid chimney problems.