In this two part series, we’re discussing typical problems that owners of old homes have with their chimneys. This Old Chimney Part 1 begins the conversation that we’re continuing this week. 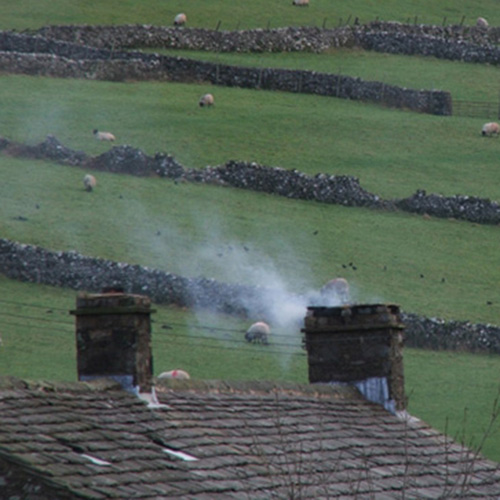 If you see smoke on the face of the fireplace above the lintel (The thick metal bar that holds the bricks across top of the opening,) it is a sign that the chimney is smoking. This is fairly common issue with old chimneys. There are a few reasons why chimney airflow problems occur.

Older houses are usually not very air tight; in fact they’re more likely to be drafty. But maybe the house has new windows and doors, the walls are tight etc. so maybe the house can’t breathe. This can cause a change in air pressure that hurts the drafting process that causes smoke and gasses to rise up the chimney. It’s unlikely that an old house can be sealed up so effectively, but it is a possibility.

More likely is that the flue is either blocked or was never properly sized. Proper sizing means that there is a relationship between the size of the flue and the opening of the fireplace. Think of this in a ridiculous extreme: if you had a flue the size of a soda straw you would not expect a fireplace to draft properly. There are ratios that work or don’t work. That ratio can be changed with a smoke guard. These are commonly available from hearth shops and chimney sweeps. Glass doors usually will help a chimney smoking problem as well.

You should inspect the fireplace carefully with a bright light to see if any wood is visible. If so, stop all action and call in a professional CSIA Certified Chimney Sweep. Wood in this area can cause fires quite easily and is a real safety hazard. If you don’t see anything, then get a chimney sweep to pack the gap with ceramic wool and refractory cement. Packing the hole yourself with typical cement won’t work because of the extreme temperatures in the fireplace.

Did you ever wonder how the hearth “stays up” that is to say: what supports all that weight? What’s under those bricks and that heavy firebox? The answer could surprise you- sometimes very little! Or sometimes, commonly found in old houses, there’s wood. Not good.

Go to the basement and look up to see what’s supporting the hearth. If you have metal I beams then great (I’d be surprised if you do.) Perhaps it’s supported on a masonry foundation, and that’s good. Or if you see cement that’s probably fine too, while it’s not clear what’s holding the cement in the air (though something obviously is) at least it’s not combustible.

But if your hearth is supported by sitting on a piece of plywood, you need to change that. More than one house has burned down because of that sort of thing.

Improving the Smoke Chamber of your Old Fireplace 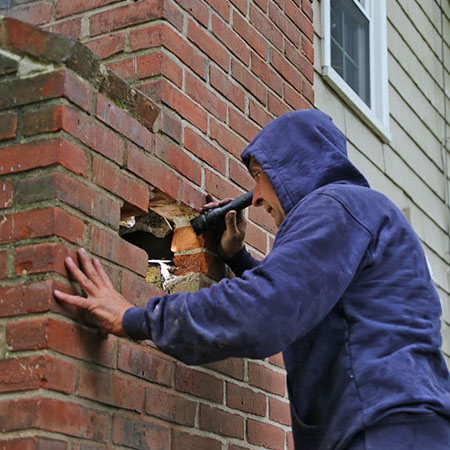 Above the damper area is the smoke chamber. This is the area where the wide fireplace funnels up to the smaller flue. The bricks are stepped in, or corbelled. That’s a rough surface, and it makes for a) less draft, b) more heat transfer though the wall c) a dirtier chimney. And modern codes say they should be parged. Parging is the practice of spreading some sort of cement over the corbelling to smooth out those square steps. This is not something you can do yourself. Somebody has to open the back of the smoke chamber (take bricks out) and reach through the hole to parge. Alternatively there are materials that can be sprayed (sort of like Gunnite, only it’s a different material.)

Call a chimney sweep and ask him if he’s able to spray or parge the inside of the smoke chamber. You may need to make a few calls to find somebody, because the work isn’t easy and it’s not fun. But it’s worth doing- the smoke chamber is usually the weakest part of the system next to the chimney itself.

If you’re lucky, that area is already parged and the parging is holding up well.

Well, that wraps up our conversation on old chimney problems. Have questions? Old home stories? Let us know in the comments section!