Chimney Sweep Trivia: The Light Side

The following post is brought to you by Nayaug Chimney Services, chimney sweeps from Glastonbury, CT.

What do a pig and a whale bone have to do with chimney sweeping? Why did chimney sweeps of long ago wear top hats? Is it true that many people consider chimney sweeps to be as lucky as a rabbit’s foot? What the heck is a spazzacamini? These are just a few of the questions that can be answered when you take a look at the light side of chimney sweep trivia.

After the use of climbing boys was outlawed in England in 1864, inventor Joseph Glass came up with the original chimney cleaning equipment that was so effective, the cane and brush design is still in use today. One major difference is that early canes were imported from the East Indies and made of Malacca. Chimney cleaning brushes were originally made with whale bone, not nylon or polypropylene, as they are today.

There are a couple of different stories which provide an explanation for why early chimney sweeps wore top hats and tails.

A common tale is that chimney sweeps got their top hats and tails as cast-offs thrown out by funeral directors. Being black in color, the garments were practical; and they gave a distinctive air to chimney sweeps in their filthy but necessary professions.

One legend is that in about 1066 King William of Britain was pushed to safety by a chimney sweep as a runaway horse and carriage barreled toward him. The king rewarded the chimney sweep by declaring sweeps lucky and allowing chimney sweeps to wear top hats, which had previously been a custom reserved for the gentry and royalty.

One of the bizarre stories involving chimney sweeps as good luck symbols also involved pigs. It was for a period of time a custom on New Year’s Day for a town chimney sweep to carry a pig through the streets. People would pay the sweep a small sum and then, while pulling a hair from the pig, make a wish.

One legend that is still recognized today is that it is good luck to see a chimney sweep on your wedding day, and it’s even luckier if you shake a chimney sweep’s hand or if he gives the bride a kiss. There are a couple of stories behind this tradition. One is that a chimney sweep once fell from a roof; but because his foot was caught on a gutter, he hung upside down from the roof. A young woman who was engaged to another reached out and pulled him inside through her window, saving his life. The two fell in love and eventually got married to one another.

Another legend which suggests that chimney sweeps are symbols of good luck at a wedding involves King William of Britain and the above-mentioned story about top hats. Part of the king’s reward for saving his life was to invite the chimney sweep to his daughter’s wedding. Ever since that time, it has been considered good luck to have a chimney sweep at your wedding, at another special event, or even as a visitor to your home. 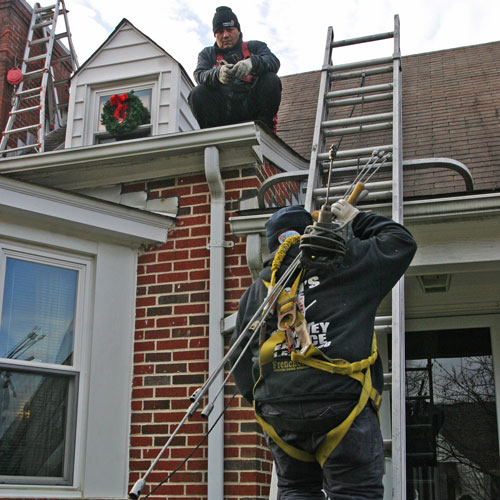 “Spazzacamani” is the Italian word for “chimney sweeps,” and it’s also the term used in reference to the annual international gathering of chimney sweeps in Santa Maria Maggiore, Italy. European sweeps have gathered there annually for decades as a way of honoring the climbing boys – referred to as the cradle of the chimney sweep profession – and to celebrate the great progress made in the industry since that cruel, centuries-long practice of sending small boys to climb up the chimneys with cleaning brushes.

In McPherson, Kansas, the largest chimney sweep in the world stands on the side of the road. The huge chimney sweep was formerly a baker holding a wooden spoon, but the owner of a chimney sweep company, Vaughn Juhnke, bought and renovated it.

As professional chimney sweeps, we take great pride in our profession and how far we have come since the days of such things as toting pigs down city streets on New Year’s Day. Give us a call if you need a chimney cleaning or chimney inspection or if you need any repairs, including masonry repairs; our technicians are all licensed professionals who have the skills to help keep your fireplace and chimney safe.