If you’re a homeowner in the Washington D.C. area, there is a good chance you’re already steeped in Colonial Revival sensibilities. After all, the original proponents of this style scoured Virginia and Maryland for colonial prototypes. Your home, whether in Bethesda, McClean, Potomac, or anywhere, is your ultimate stylistic expression of personal values. The well-proportioned, stately, and classically-inspired colonial revival homes speak to the self-reliance and dignity of their occupants. 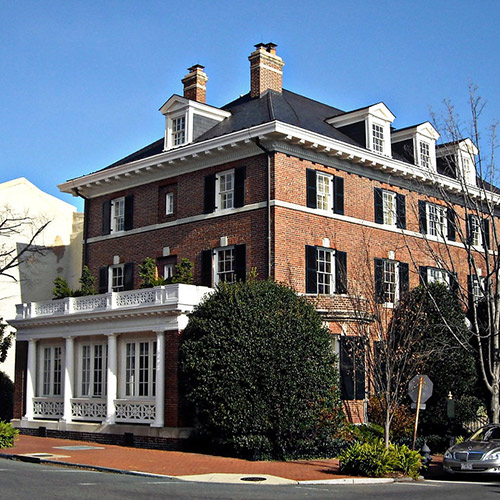 Revival Style and the Chimney

As the name implies, popularity of Colonial Revival style homes was the result of a great deal of reflection on the part of American architects and homeowners. This look into the past yielded a wealth of construction and decorative elements upon which new technologies add to forge an updated stylistic approach. You’ll find dentil moulding on the narrow eaves as well as non-functional shutters by the windows, but most of the exterior ornamentation typically draws focus to the entrance. Appropriately, then, you will find the same Georgian, Federal and Classical accents on the fireplace mantle of your new Colonial Revival house.

Few things symbolize self-reliance better than the hearth. The chimney atop your Colonial Revival home in Rockville means you have a created a warm, safe place for your family. Traditionally, family life revolved around the hearth and chimney. When not laundering the family’s garments, the fireplace also cooked their soups, puddings and sustenance as the children played and parents gazed into the embers. Their clothes, food, body – life itself – depended on a properly functioning chimney. To this timeless scene, the whole way of life, proper maintenance of the chimney was as essential then as it is today.

The early colonists’ lives depended on their chimneys and fireplaces. Revivalists take great care in making the fireplace the focal point of the room, with a decorative motif that echoes the entrance. Classical proportions and mouldings favored by the original American patriots pay a stately respect to this vital organ of family life.

Between annual visits by an accredited chimney sweep, homeowners can take a number of measures to ensure the safety of their families. Capping your chimney, for example, will prevent water damage, reduce down-drafts and ward off nesting animals.