Why You Should Not Remove 3rd Degree Creosote from Tile Liners

Now for the case for not removing 3rd degree creosote from tile chimney liners. 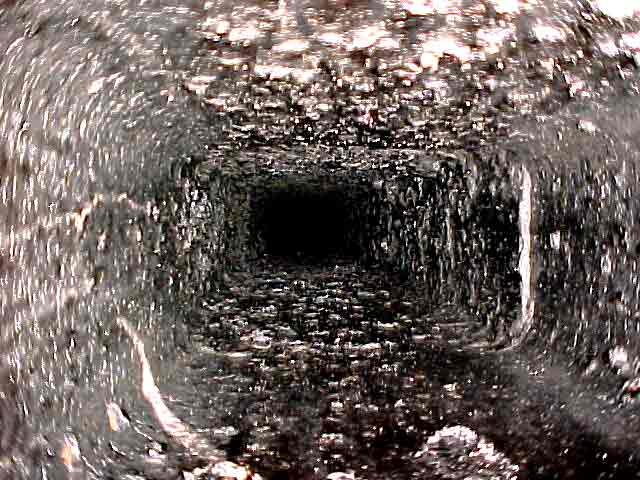 In tile-lined chimneys, it’s the exceptional chimney that has good mortar joints.  In fact, if I were to blindly bet ten people $10 that their chimneys have poorly sealed mortar joints and then we investigated with a closed circuit chimney inspection camera, I stand a good chance of making $100.  I might lose one or two $10 bets, but that’s about all.

The problem with having openings in the system is that liquid creosote can and does go through the joints and/or cracks and accumulates outside of the flue tile.  This is a very serious problem because in a chimney fire this creosote ignites as well and becomes a slow-burning creosote fire not contained inside of a liner.  A house fire becomes a much greater possibility.

It is probably best to consider unsafe any chimney that has had 3rd degree creosote in it, especially if there has been a chimney fire.  Frankly, even if servicemen remove as much creosote as possible, the cleaning does not yield as much safety you’d hope for.

In short, it’s probably best to remove the old tiles completely (getting rid of creosote on the outside of the tiles as well) and replace the liner with a new insulated stainless steel liner.  Here’s why.

The reasons there are bad mortar joints or cracks in chimneys are numerous, including:

Before the 1970’s wood heating appliances had lower heating efficiencies.  This was partly because the wood was not as fully consumed, but also because a lot more heat went up the chimney.  This combination usually produced 2nd degree creosote, which is manageable.  Today’s wood burning stoves are very well engineered to get more heat from less wood, and houses are tighter than ever.  Chimneys routinely create 3rd degree creosote (because of the lack of combustion air and the low flue gas temperatures.)

This is why you see so much stainless steel chimney lining done these days.  The chimneys of America are undergoing change as they are being properly sized to their appliances, either by upgrade or by repair.  The stainless steel liners are:

One reason why more people don’t reline is that reline jobs may cost more than people were planning for; another reason is that many folks just don’t understand the need.  It’s going to take a long time to convert America’s chimneys if either insurance companies or building codes don’t speed up the process by insisting that people change over to a stainless steel liner (or not be allowed to burn wood).