Common Issues Found In the Chimneys of Old Houses 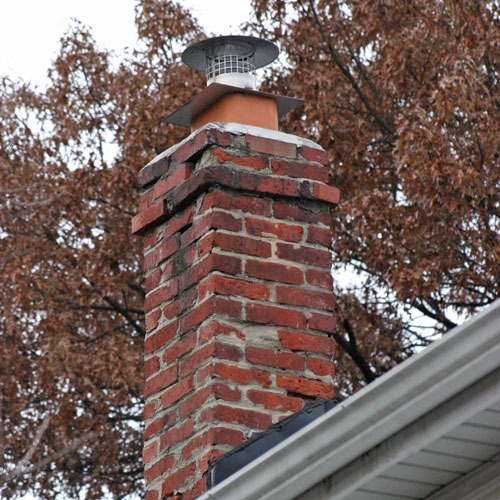 If you own an old house or at least an older house, you will have different considerations than those who own newer homes. Newer homes are more likely to be built following modern codes and with materials that conform to modern published standards.

This means newer homes are more likely to be safe. This doesn’t necessarily mean that your old home is unsafe, however. You just have to know what you’re looking for and bring certain conditions up to proper safety standards. This article will guide you through the considerations specific to your chimney and educate you about your options.

Types of Fireplaces in Older Homes

By “old” we mean houses more than 60 years old. The fireplaces and chimneys in older homes are almost certainly masonry based. The metal, factory built hearth systems are found mostly in houses built after the 1950s. Most masonry chimneys are made with bricks, though there are also block chimneys.

Why You need To Improve Your Old Chimney Before Using It

Lack of lining is one of the most common issues that we see in older chimneys. As a flat statement, any chimney that is not lined should not be used for any purpose. You may say, “Well, it’s been there for 80 years, so why change it now?” and that’s a reasonable question. In some cases the answer is that nothing has changed – the situation has always gotten worse! The reason why your chimney’s condition has gotten worse is because most things wear out over time and a chimney is certainly no exception to that rule.

Additionally, the fact that furnaces and stoves of 2011 require a more capable chimney to support them makes unimproved, older chimneys more or less obsolete.

Why Chimney Linings Are So Important

Here are a few reasons why chimney linings are so important:

Basically, have your chimney lined as soon as possible.

Block chimneys do work, but as a general statement they are less than desirable. Block chimneys are really meant to be surrounded with bricks. They are more subject to cracking, leaning and leaking; most any problem you can imagine. As a general statement, if you have a block chimney built right against the house it’s probably not legal and if you have a wood-frame house you probably ought to just tear it down. However, if you can build brick around all four sides, unlikely in most situations, you can get the clearance to combustibles called for in the codes, the chimney can be serviceable.

Old brick chimneys have their own set of problems. Fortunately, older bricks are often actually better than newer bricks. It’s the way they were fired that makes the biggest difference. That’s why you see some houses from the 1800s or even 1700s where the bricks are still in great condition. Yet you’ve also probably seen modern houses with the faces of the bricks popping off. So if you have an old house, you probably have pretty good bricks!

Shifting Ground and your Old Chimney

The ground is always moving a little bit. Fortunately houses are actually a bit elastic, or at least allow enough give that they don’t split in half when the ground heaves an inch. But over time, those stresses can break bricks. If you have that problem in your chimney or walls of the house, it’s probably visible. Broken bricks are just a fact of life sometimes. You might need to replace them eventually.

Sun, wind and rain are hard on any masonry work, especially the mortar. There are so many different types of mortar and concoctions of mortar cement that there’s no guessing how long your mortar is supposed to last, but suffice to say 60 years on a chimney is a long time.

When the mortar wears out it’s either time to rebuild or re-point. Re-pointing is the process of grinding out about an inch of the old and broken up mortar and putting in new mortar without removing the bricks. Unless your chimney is quite large, it may be just as easy to dismantle it and rebuild using the same bricks.

One thing about those great old bricks is that they soak up water from the rain. On the sunny or windy side of the house that’s probably not a problem because they dry quickly. However, in shady areas the bricks can hold water and in the winter that water can freeze. This type of problem is usually visible. There are good water-proofing materials such as ChimneySaver by Saver Systems which do not block the pores of the masonry. Whatever you do, don’t use silicone, such as Thompson’s, because silicone blocks the pores and it has a shorter life due to UV light breaking down the silicone. 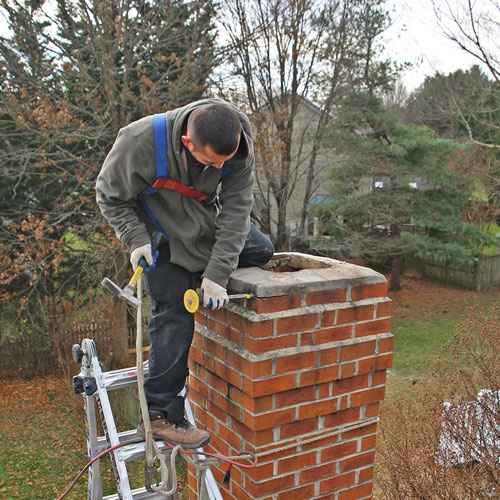 There’s another aspect of the chimney that’s almost always lacking on older homes, and that’s the chimney crown. The crown is the cement part on top of the chimney that keeps the rain from going into the structure below. The crown catches more sun, wind and rain than all the rest of the chimney, and it is usually not as thick as a brick. Crowns are almost always cracked. I can’t think of one crown I ever seen that wasn’t cracked. If the crown is bad enough, it needs to be taken off and re-laid. If it is cracked but still structurally sound there are good materials to coat the crown, which will save money.

Regardless, you should have the crown coated with CrownCoat by Saver Systems or some similar product. If you put up a brand new crown, coat it so it doesn’t break up again.

How to Deal with Lack of Clearance to Combustibles

Clearances to combustibles is something they didn’t worry about in the old days. It is quite common to see wood beams or 2x4s right against the masonry of a chimney. When there are fires in old homes, it’s also common to find that some of this wood ignited. Oddly enough, the process of pyrolization takes place over many, many years. The unscientific definition of that is that the ignition temperature of wood gets lower over time. In other words, it takes less heat to catch it on fire 50 or 100 years later than when it was new.

The way to deal with that is to make sure you have a liner installed to zero-clearance (insulated). The only alternative is to tear out the walls and cut away the wood. Practically speaking, nobody is going to do that, and even if you do, there’s no guarantee you’d get it far enough away. Take a look in the attic and remove wood you find against the chimney up there. That’s not so hard to do.

Removing Debris and Blockages From Your Chimney

At the base of an old heater flue, usually in the basement, there can be all kinds of debris. Sticks and leaves, dead birds, or maybe a lot of soot. Old oil furnaces may have released sulfuric acid in the chimney for years and worn the chimney out from the inside. Aside from that though, the bases are often just blocked by debris. Just be sure to have a chimney sweep come out to make sure it’s open. If you have a flue that was converted from oil to gas, you would be venting carbon monoxide into the house. Be sure to have this checked, and especially if you or your family have a lot of colds or headaches because this could very well be carbon monoxide poisoning.

With regards to that debris in the chimney, many older homes are “finer homes” that are surround by trees or perhaps in a semi-rural setting with lots of animals and leaves. That being said, a chimney chase cover is smart to prevent debris from building up as well as protection from harsh weather conditions.